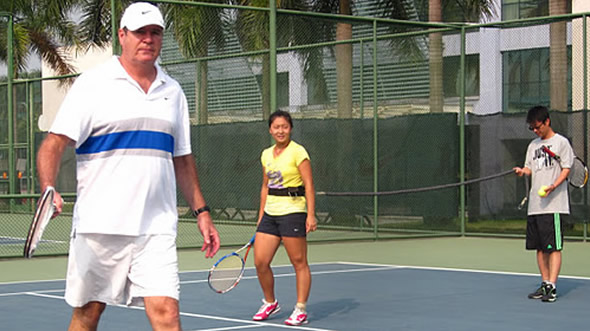 I was invited by the Chinese Tennis Association to coach during their Winter training camp at their Southern base in Jiangmen, about 2 hours from the 3rd largest city, Quanzhou.  Thank goodness I flew business class. It makes such a huge difference on these long journeys.  Jetlag was tough 1st night (woke at 3am and read until breakfast) as was the shock of the bed which was almost as hard as the floor, but toughed out Monday and slept through fine from Tuesday.

My first impressions and thoughts are:

Anyway early days so we will see how my journey unfolds and if my impressions change.

Tennis going really well with girls. The top physical trainer has arrived (Professor Wong) and he speaks half decent English....result! His 1st core session was world class. I made notes but when he repeats I will film the exercises as some are really imaginative on wobble mat + tennis related. Nothing overly new but the take on basics was East meets West.

I hope to get out on my day off (Sunday) and see something of the city and find a decent coffee.

Bushtucker trials: very apt the series is on now as some of the food is challenging to eat for a Westerner! I never thought I could fear food but there are some dishes that the not knowing is so tough. Do I try it or not? How scary will the filling in a rice cake be? How spicy....nearly blew my head off at lunch today and the vegetables looked so innocent. Is corn soup that bad for breakfast or will the potato fish omelette squares make it down to my stomach? Overall it is fine if I don’t get too adventurous but how many mornings do I have hard lukewarm fried eggs on toast......every bloody morning for sure with Indonesian noodles. Every other dish for breakfast is so not on for a Westerner.....corn on the cob and fish soup! No thanks.

I have found an English movie channel. RESULT! I like my own company but hell from 7pm every night it is tough given my conversation during the day is limited to haaa; ok; hand gestures and my vocab of 15 words in Chinese vs most of them with a vocab 20 English words. I make them laugh....guess pronunciation is not quite the full monty.

This sounds like it’s no fun but actually having the Doc sink needles in me and electrically heat them, seeing loads of spitting, shovelling and sucking in noodles are part of life here and its ok so far. Went to town and had a coffee.....mistake so no relief on that front yet.

It’s odd but in a strange way as long as the tennis goes well and the appreciation is there the rest is not a problem, even the rock hard bed. Shit scared my own bed will seem like a jelly bowl that I can’t handle when I get back.

“You all enjoy your coffee, pastas, salads, carrot cakes and duck that doesn’t hiss at you before you swallow” (joke).

As I write this storms and winds roll in. Let’s hope a movie from this century comes on this evening so I know if my telly is actually a colour TV.

God help me if there is not a 5 star western hotel to go hang out and have a meal. Skype to the rescue.

PS: just smiling at Rocky another trainer.....please like it’s his real name! Awiaaan Awiaaan.....I wuv u Awiaaan! Naturally having hung round Jimmy Edgar long enough I felt the need to embellish just a tad but not enough for him to think I’m doing the jokes.

Rocky is a lovely guy. Trains like an animal and therefore eats ridiculous amounts.

“Breaking news”....as Bath coach James Andell would say. I found a hotel and a mall with Western food and a half decent coffee so a couple times a week I will be off to savour a bit of variety! Also big result – I ask them to heat my coffee in the microwave every morning so bingo – hot coffee! Why did I not think of this earlier? Disappointingly branded clothing and anything branded is not cheaper here and even food is not as cheap as it used to be. Taxis are still cheap and the market stalls are but it would take a braver man than me to sample street food.

The 1st week went well and was asked to work with a top male junior on Sunday morning so no full day off. It was enjoyable as the boy had a great appetite for work and a good game, but has a very dickey serve which we made a start to altering. Will do again Sat afternoon as I refuse to do another Sunday when I will give the 7am breakfast a miss. It is weird as they have a coaches meeting every Sunday at 7.30pm to plan the week and get their orders from on high.  I’m not invited. My interpreter Aileen then knocks on my door to give me my times and the fitness schedule and who I will work with. It was pretty funny as when I needed help I would ask for Aileen and everyone would look at me blankly? “Aileen, you know Aileen?” Blank! Turns out they all have a Chinese name and for Westerners will kinda make up a western name so the players/other coaches had no idea I wanted Shan.

Slowly facts begin to emerge such as the coaches go out most evenings and drink a lot. This apparently is normal for China and drink is a huge problem with hospitals struggling to cope with the influx. A couple of those who speak enough English have been surprisingly open in their criticism of the system and called the cultural revolution a catastrophe for China and the lack of freedom a big problem. There will be evolution here or major upheaval. The fear is still too great but I remember Croatia 6 months before the war and they all knew it was coming. Here it seems mostly talking, but many apparently are active and I predict big political changes in the next 5 years. The players and coaches all wait for instructions. Very little thinking going on and they really struggle when given choices. I sent them off court again today as start was horrendous. It is so hard to get any mentality message through. They always say yes whether they have a clue or not.

Sorry all not quite as humorous today but easy to slip into corny if trying to be funny when there is no angle......unless as talented as Jim! Overall people are friendly and are trying hard to help which I do appreciate. The Doc is now my mate and treats me every day. Surely my back and butt will improve and Baz Scollo there is no elephant in my room at the moment! I’m doing my exercises.

The culture is different so slurping food is normal and to be fair with chopsticks it is impossible not to get your head down near the bowl and suck food in. Snorting and clearing the throat followed by a good spit is normal and not rude. Neither is just walking into an elevator without waiting for occupants to step out and smoking is still allowed in most places.

Great to hear that Sam Murray won the British Tour Masters tournament at a canter.

Two weeks done. I’m out for my second dinner tonight. There will be much smiling, laughter as beer will flow and a thousand “cheers, prost, chinchins, dosvedanya’s, good, velly good, habung (word 4 good), ok’s and head nodding. I will get some western food and down a few. Change in plan – been invited to local fishing village restaurant. Maybe you can feel my sweat and fear through the email. Everyone is so friendly trying to impress me when all I want is to go to the Western hotel restaurant in town. Is this going to be my final BUSHTUCKER trial where I quit?? To top it off - Tomorrow is sightseeing day......and not sure town has anything to offer but can’t say NOOOO.....

The meal was fantastic. The salmon was awesome as was the duck and vegetables. Selecting the live food was scary but the way it was cooked and presented was superb. It is easily best meal so far and genuinely an outstanding dinner. What a relief.

The day out was also a pleasant surprise and Dr Wong and his friend were so hospitable. We travelled couple hours to famous park in the mountains which was interesting with artefacts from 2400 years ago, and lots of temples with Budhas (Tao religion is no1).

Most coaches’ smoke and I’m still blown away at how much coaches can drink every night and still work the next day with seemingly no side effects. Thank god I’m not invited as it would be hell ending up drunk in a Chinese Karaoke most nights listening to crap Madonna’s and Beatles or more likely Chinese pop. Like the Japanese, Chinese love singing karaoke.

Had matches today and happy to report that China funds a load of average players as well and it is too easy to be good here as well. My opinion is until federations fund through bonuses paid for results only this will always be the case. The players are all fit but focus is no better, although less verbal moaning in matches. The 2 boys are very average and raw in matches so we will have usual to do....height, top of bounce and proper focus to not miss for fun.

Everyone is so respectful and friendly so it has been a memorable experience; it is just a tough adjustment to life as we know it. Beijing and Shanghai are easier as expats and Western culture is easy to access but outside the major cities it can be difficult, language and food being the biggest challenges. I will gladly go back and found the whole experience challenging but also very interesting. People are fundamentally the same the world over but culture does have an amazing influence over the thinking and whole life experience. The people I’ve met have been lovely and positively influenced my view of China and its people. My thanks to Wenbing for setting up the trip, to Aileen my interpreter, Professor Wong who became my friend, invited me out of camp and was excellent at his job, Shan-Shan who helped Aileen, the Zhu group (individuals taking their own path) and all the trainers and coaches who helped. Pan the lead coach for girls and the doctor who treated me so effectively, I appreciate your consistent friendliness, and the players for finding a way to understand.