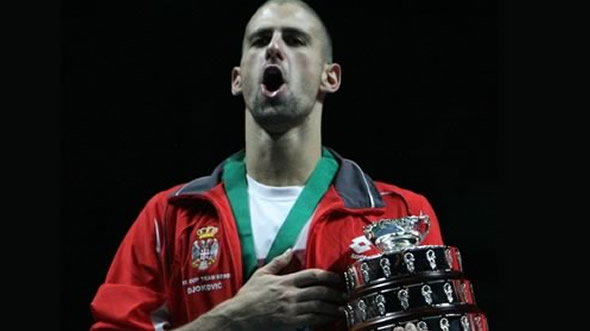 My good friends Igor Tomasevic, Barry Cowan and Nikos Zinas were privileged to witness the Davis Cup triumph in Serbia and then celebrate with the team afterwards. Igor felt Novak had achieved such a momentous and historical landmark for his country that his strength and belief in himself altered. He shoulders his status of hope and admiration for Serbia with a sense of pride and responsibility driving him to greater heights rather than viewing it as a pressure. Simply winning for himself and his country is a pleasure. Champions thrive under pressure. Diamonds are created under extreme pressure and Champions see this as an opportunity to shine. Billie Jean King famously spoke the words "pressure is a privilege" appreciating the gift of being able to play for titles.

Novak is headed towards the No1 spot. His forehand has improved as has his serve percentages, something Murray needs to learn. Will he get there? He has the momentum, but the clay court season could derail the juggernaut back to Nadal. It has not yet been mentioned much but he could win all 4 slams because his game is suited to all surfaces, Wimbledon possibly being his toughest test as Roger, Rafa and Murray are so strong there, but with confidence so high it is possible.

Del Potro will just get stronger so the big 3 will be the big 4 and if Andy finds the gear of aggression and mental responsibility that Novak has found since the US Open then it is the big 5. How fantastic!

How different would things have been had he lost the 1st round at the US to his countryman Troicki trailing 2 sets to love and a break, looking tired and sorry for himself. He found a way to win and the journey to the final began. Saving matchpoint and beating Roger over 5 sets was another mental milestone.

His mentality was close to Murray in that frustrations during matches would drain focus and energy sometimes at key moments so seeing Novak take the small extra steps to better emotional control should encourage Murray. The margins are so small at the top it is difficult for any player to maintain the "edge" over the others which is why the records of Federer and Nadal are so respected and formidable, but right now the person most likely to add significantly to his trophy cabinet is Novak, no longer a "Djoker" in the pack but more like the "Ace".

At some point you expect fatigue to play a part so I would not be overly surprised if he does not win Miami. The clay court season belongs to Nadal, but this year it will see his strongest challenge yet and I expect Novak in the final opposite Rafa at the French Open....and who can argue that....mmm...Roger, Delpo, and possibly Soderling, Verdasco, Ferrrer, Berdych and Murray! Exciting stuff!