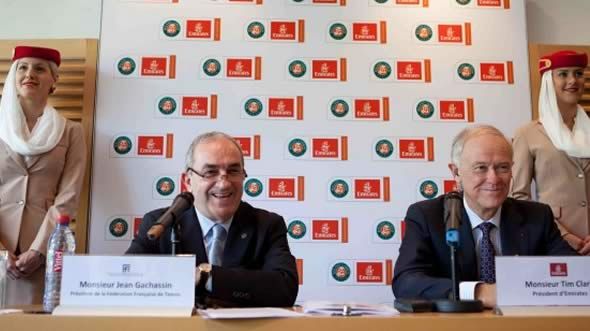 PARIS, France – 17 April 2013: Emirates, one of the world’s fastest growing airlines and Roland Garros have announced a five-year agreement appointing Emirates as Official Partner of the Roland Garros tournament® starting with the 2013 edition from May 21st to June 9th, 2013.

The announcement was revealed today by Tim Clark, President Emirates Airline and Jean Gachassin, President of the French Federation of Tennis, during a press conference held in Roland Garros Stadium in Paris.

“Appropriately named after famed French aviation pioneer and tennis supporter, Roland Garros, this tournament is a natural extension of our existing tennis sponsorship portfolio. Watched by millions around the globe this acclaimed clay court championship is the perfect platform with which to align our brand,” said Mr. Clark.

“The global following for tennis is extensive. You don’t have to play tennis to be a fan of and appreciate the dedication needed to be one of the world’s best players.  It is our own appreciation of this sport that has been the catalyst behind our various global tennis sponsorships, including two of the Grand Slam tennis events.”

"We are particularly delighted and also proud to welcome an international brand such as Emirates amongst our official partners,” said Jean Gachassin, President of the French Federation of Tennis. “The arrival of Emirates fits in perfectly with our development and partnership strategy of aiming to expand our global reach. And of course what better association, between the French Open which is named after Roland Garros  a pioneer in the world of aviation – and one of the world's foremost airlines.”

As part of the partnership, Emirates will benefit from significant branding of the Centre court Philippe-Chatrier, as well as panels on competition courts. In addition to a private lounge for Emirates guests at the Roland-Garros Village and boxes along the courts, Emirates will also have a dedicated area to welcome the general public in the RG Lab, the popular Fan Zone area.

Emirates’ sponsorship of Roland Garros is the airline’s third tennis sponsorship in Europe after the Internazionali BNL d'Italia (Italian Open) announced last year and the Barcelona Open revealed in March 2013.

Other major tennis competitions sponsored by Emirates around the world include; the US Open, the Rogers Cup, BNP Paribas Open and the Dubai Duty Free Tennis Championship. Emirates is also the Official Airline of the ATP World Tour and sponsor of Emirates ATP rankings.

In France, Emirates has been the shirt sponsor of current league leaders Paris Saint-Germain (PSG) since 2006 and has sponsored the Alstom Open since 2010.