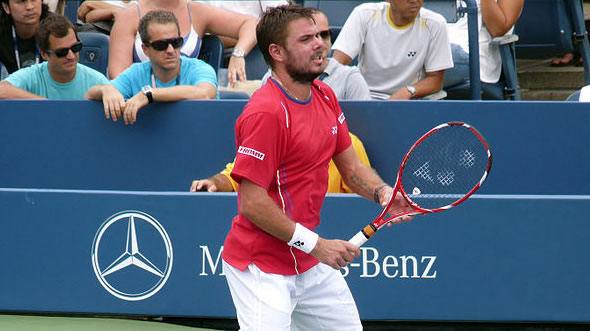 US Open Mid-Tournament Review: What’s next for the big names?

The US Open is well underway at Flushing Meadows and we have already advanced into the quarter-finals of the competition. While the opening rounds are widely considered to  trim the numbers, so to speak, rather than decide who will ultimately win the competition, we are now down to the championship deciding match-ups – for both the men and the women. We take a look at several player’s prospects who are still competing, whilst also assessing what a US Open exit could mean for several stars.

His early tournament second round tie may have progressed past midnight in New York and he may have told one rowdy supporter to “shut up”, but Wawrinka eventually progressed to the third round with a three-sets-to-one defeat of Thomaz Bellucci, who is currently ranked 91st in the ATP World Tour Rankings.  The victory saw Warwinka on his way and he has since progressed to the last eight, with several early victories sure to buoy this year’s Australian Open winner as he seeks a second Grand Slam title.

Wawrinka preceded the 2014 Australian Open victory in Melbourne with triumph in the Chennai Open in India, but has been plagued with inconsistencies since.  A win in the Monte Carlo Masters looked to send the Stan into the 2014 French Open as one of the front-runners in the men’s single event, but all of the hype surrounding the Swiss tennis star proved unfruitful, as he crashed out to Guillermo Garcia-Lopez in the first round.
Wawrinka did manage to progress to the quarter-finals of the 2014 edition of Wimbledon – which was incidentally the same round that last year’s champion Andy Murray faltered at – but it is fair to say that he would have liked to touch down in America with a bit more momentum than he did.

The current world ranked number four is now set to square off against Japan’s Kei Nishikori – who is ranked 10nd in the ATP standings - in the quarter final as he bids to progress to the final four of the tournament.

Any lingering doubts about whether Djokovic can rediscover his best form were washed away in impressive fashion on Thursday, as he dropped just four games when defeating Paul-Henri Matthieu.

Djokovic often displays some staggering tennis at the US Open – having reached the final in all of his last four attempts – but his ease at dispatching 81st-ranked Matthieu will surely be worrying to his opponents.

The ‘Djok’ is heavily favoured to win this year’s US Open – in the eyes of the bookmakers at least - having shown great form in recent tournaments. The recently returned world number one earned his second Wimbledon title in June and is currently priced as this tournament’s favourite at evens with leading betting exchange Betfair’s outright US Open market.

He dispatched Sam Querrey of the USA in the third round in straight sets despite the fact Querrey had previously defeated Novak on one occasion – in a Masters event in Paris two years ago – before going on to set up a last eight tie with Andy Murray through victory over Philipp Kohlschreiber in the fourth round.

Τhe cramp that almost changed his match-up with Robin Haase in the first round appears now long-forgotten by Andy Murray as he brushed past German Matthias Bachinger with a straight set victory in the second round before earning subsequent hard-fought wins over Andrey Kuznetsov and France’s Jo-Wilfried Tsonga.

Murray will now face Novak Djokovic in the quarter final and despite a season plagued by manager changes (Amelie Mauresmo was introduced as his new coach in June of this year) and injury, his new boss believes the pressure is instead on Djokovic and not the Scot – despite recently failing to reach the semi-finals of Wimbledon for the first time since the 2008 edition.

Murray has faltered at the quarter final stages in both of this year’s previous US Open series events – the Canadian Open and the Cincinnati Masters – so it will be interesting to see if Murray can muster the mental strength to not only progress past that stage of the tournament this time around at Flushing Meadows and go one better into the final four.

He is regarded as some way off the pack however, as while Djokovic is priced – as previously mentioned – at evens for US Open glory, Murray is as much as 7/1 to win the competition, despite being regarded as third favourite behind Roger Federer (9/4) and the aforementioned Djokovic.

The American number one was undoubtedly one to watch this tournament given its location and after seeing off the efforts Jan-Lennard Struff in the second round, it seemed Isner was about to make some progress.

Instead, he was drawn to face his long-time US Open nemesis Philipp Kohlschreiber of Germany in the third round, who had managed to eliminate the American from the competition at this stage at both times of asking in the last two years.
For Isner, it was not just about advancing as far as possible in his home-nation tournament, but about proving to himself that he had what it takes to beat Kohlschreiber, but despite the ATP World Tour rankings suggesting he had the tools to do so, he sadly fell short.

Isner was ranked 15th, ten places ahead of Kohlschreiber in 25th going into the tie, but the rankings proved for nothing once the battle on the court began, as the German eliminated Isner in a 3-1 victory, crushing home-nation tennis fans’ in the process.

The current world number three is searching for major number 18 and after early performances in the US Open it seems that he definitely has a few more championship outings in his locker. The Swiss sensation certainly showed his confidence when defeating Marinko Matosevic in three straight sets in the second round, as he performed an outrageous through the legs shot that struck Matosevic on his back as he walked away having thought the point was settled.

Such evidence suggests that Fed is far from finished, as he takes to the court to face France’s Gael Monfils – who is ranked 20th in the ATP standings. The challenge will be far from an easy one though, as Monfils dispatched Gregor Dimitrov in unexpectedly comprehensive fashion to reach what is only the second US Open quarter-final of his career.

Federer may have eliminated Roberto Bautista Agut – a man who proved a thorn in Fed’s side last year when defeating him in the fourth round – to ensure he is at the highest of highs going into the tie, but the Swiss star would be wise to remember Monfils is riding a similar wave of momentum.

The women have also enjoyed a terrific US Open Championship thus far and with that in mind, we take a look at one superstar who is still in the running for the title and several who surprisingly faltered in the earlier rounds.

Where else to start but the defending champion? Serena saw off the challenge of American teenage prodigy Taylor Townsend in the second round to lay down the law that regardless of your age, nationality and career prospects - this particular Williams sister is not to be messed with.

The world number one – who is over 3000 points clear of Simona Halep in second - has been rattled on a number of occasions this season and as a result her performance at Grand Slam competitions has come into question. Williams has now gone some way to dousing those flames with her win over Townsend – who Serena had previously branded as “incredibly talented” – and subsequent straight set triumphs over Vania King, Varvara Lepchenko and Kaia Kanepi on her way to that last eight.

Serena may have become the fifth woman to have remained number one in the Women’s Tennis Association rankings for over 200 weeks on August 4th, but her Grand Slam results simply haven’t been good enough this season and with the US Open being her last chance to post an impressive finish, it will be interesting to see if she can now go all the way and win this one.

If you think that 2014 has been hard for Serena, then Venus’ year must be unparalleled. While her sister has been sitting pretty atop the rankings, Venus has worked hard to mover herself as many as 27 places higher in the Women’s rankings to 20th position.

Her Grand Slam results have, however, been similar to those of Serena’s and it seems both sisters cannot catch a break when it comes to high profile tournaments this term. Granted, Venus has suffered more than a few injuries over the past few years, but that will surely only add to her drive and enthusiasm to succeed in future years.

She dispatched Timea Bacsinszky of Switzerland in the second round to advance to a third round clash with Italy’s Sara Errani, who is ranked 13th in the Women’s standings – but that was unfortunately where her journey came to an end.

Victory in the US Open would have been the perfect exclamation point on an impressive rankings-scaling season, but Errani spoiled the party as she defeated Venus 2-1. Given the year Venus has had, it appears this exit won’t be too much of a dampener, but the real question is whether she can maintain her ascent up the rankings next year.

Sharapova won this event back in 2006 but has since dropped way off the higher echelons of women’s tennis, having been a fifth seed for this competition before it began.

Sharapova did see victory in her second round match against Alexandra Dulgheru – despite being taken to three sets in the process – and the Russian’s recent performances did initially suggest that she had the staying power to go far in this competition – especially after her third round victory over Sabine Lisicki – but Caroline Wozniacki changed all that.

The young Danish sensation – who turned pro nine years ago at the age of 15 – was offered a strong challenge by Sharapova, but the Russian was powerless to stop Wozniacki earning a 2-1 victory to advance to the next round. Wozniacki has since made it to the quarter finals and it will be less disheartening for Sharapova should she advance even further in the competition.

Halep has won two calendar titles so far this year and had a 76% win record from her games during the 2014 season going into this tournament, but her journeys to the later rounds of previous Grand Slam competitions may have proved telling, as she was eliminated by Croatia’s Mirjana Lucic-Baroni in just the third round.

Her straight-set defeat of Jana Cepelova looked promising, as she submitted only three games to her opponent and looked good in winning the second round tie, but the defeat in the next round shows the world number two has work to do, although time is on her side at the age of 22.

The Romanian made it all the way to the French Open final before she was eliminated and followed that performance up with a semi-final appearance at Wimbledon, so she does have the quality to progress to those stages consistently, it appears to be a case of whether she can actually defeat opponents at that level rather than simply meet them there. Regardless, the future looks bright for Simona Halep, despite the early exit from the US Open this year.