One of the most difficult jobs for a coach is managing expectation. Expecting too little of a player or too much can be equally damaging to a player’s progress. The other mix in the equation is players' own expectations, which they need to learn how to manage and our job as coaches is to give them tools to help this management process. Similarly the coach may well find he also has to deal with the pressures of 3rd party expectations such as parents, management companies, sponsors, governing bodies or even imaginary pressures.

Wouldn't it be great if all parties involved understood expectation in the same way and could discuss it using the same method of evaluation?

After years of trying many different ways and methods to manage expectation, I hit upon the idea of combining the long-term goals with short-term goals and also the dreaded ‘results versus building the game for the future’ debate into one graph.

This graph also has the added advantage of giving players hope during the bad times and a kick up the proverbial if they become complacent during a good run of results.

Graph 1: Working hard to improve your game, but results are poor.

Graph 2 : Player gets on a roll and confidence is so high that player overshoots their foundation – results are achieved at a level higher than expected.

Graph 3: If a player gets complacent or begins to have unrealistic expectations, then after the first couple of losses there is a drain in confidence. The player will quickly bypass the foundation in a negative direction.

Graph 4: The key is the attitude to the work and the understanding. Players and coaches need a spirit of continued respect for the process of learning.

Player A is a hard worker with a great attitude. He finally has a big move from 180 to 90 in the rankings but his game (foundation) is not quite solid enough to warrant a consistent top 100 ranking. The inevitable happens and he loses a few first rounds, confidence drains and doubt creeps in and over a period of six months his ranking drops back to 140. He works hard all through this period but, apart from the bad results, his game seems to have deserted him no matter how hard he tries to improve. Although frustrated, his attitude to practice is still positive and his poor play sometimes translates into humour.
Suddenly he wins a match he should have lost. Things begin to click and he begins the roll of his life. He rises to 80 in the world and finds himself comfortable this time because his foundation is now strong enough to cope. The meteoric rise continues to top 15 over 12 months touching 10 in the world. The wheels begin to slow and losses mount up. The ranking is higher than the foundation but his work ethic throughout has taken his foundation a long way, so he drops back to around 30. The next time he goes to top 10 he will stay but may overshoot to top 5 before slipping back to 8 or 9 etc. 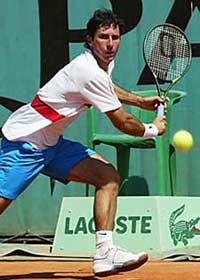 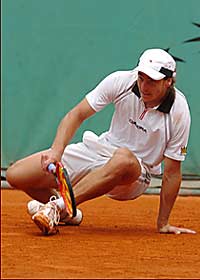 It is important to understand that a player will eventually settle in line with his base foundation and fluctuate results-wise according to confidence, momentum and experience.
Player B is a hard worker with a great attitude in spurts. He finally has a big move from 180 to 90 in the rankings, but his game is not quite solid enough to warrant a consistent top 100 ranking. However during his brief period in the top 100 he is complacent, spending more money than he should and finds excuses to cut corners. He plays a few matches where the going gets tough and instead of fighting hard he lets them slip, bluffing himself that he has earned the right to pick and choose when he will give his all and besides he was not feeling great etc.

The pressure builds as his lifestyle is lived like he will be top 100 forever,  yet he knows deep down that he cannot sustain his ranking because his foundation is not that good and, worse still, he is not doing anything constructive to improve the foundation. The inevitable happens and he loses a few first rounds and confidence drains. Doubt creeps in and over a period of nine months his ranking drops back to 180, steadies for a while but the attitude is still poor and he bluffs himself that he will soon be back when his problems pass and he can work harder again. Everything becomes past and future-based, with the key ingredient of working hard consistently day-by-day missing.

The player becomes unsure of where his foundation actually is and cannot establish this without the hard work and the ranking slips to 400. It becomes sure that the player can never recover unless he changes his attitude and work ethic and even then the foundation and confidence is so shattered that fully repairing the foundation is near impossible. Andre Agassi and Vince Spadea are good examples of slipping way beyond their foundations in a negative direction before getting it together to re-emerge stronger than ever.

The above stories are based on real people and I'm sure you can track any career and see the pattern of the relationship between results and foundation emerging. Many players have struggled for a year after winning a 1st Grand Slam on momentum and often overshoot (Sampras and Becker), but when they come good again the game belongs consistently at the highest level.

The graph is an excellent visual tool to help all involved with a player to discuss results and progress with a similar understanding and using the same method of evaluation.