Physical Trainer Jez Green says an explosive first step is crucial to efficient tennis movement. All you have to do is ‘split, sink and glide’

Top tennis players do not sprint like track athletes as is sometimes suggested. They instead ‘prowl’ as if tracking prey. Just like cats getting ready to pounce on a mouse, the world’s elite move with a lowered centre of gravity, ready at any moment to accelerate in any direction. It takes high levels of strength to move with such ‘effortless effort’ and with the ability to stay relaxed.

It is also a myth that top players run with small steps or move in straight lines. They do in fact run with big steps (although there may be smaller adjustment steps in between) and normally ‘bend’ their runs to give themselves space to hit the ball.

Watch tennis on TV and you’ll see how the game has reached another level in terms of how dynamic it is. On average, top tennis players change direction every 1.1 seconds – that’s 4.2 times per point. They use 300 to 600 maximal bursts of energy (or explosive movements) per match. 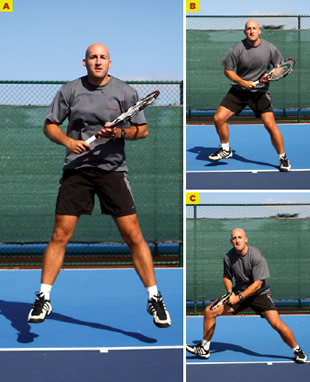 When it comes to tennis movement, it is the first step that is by far the most crucial. The legendary Pete Sampras used to say that as long as he got his first step right, the rest would alwaysfollow. He was well known for having one of the fastest first steps out there.

The first step is essentially the very first move you make when you react to the ball. It is an acceleration step to get you going and is usually very explosive. It involves a big step to help you get to the ball most efficiently. It could be sideways, forwards, back, up, down or indeed at any angle possible.

It’s crucial because it is the first step in the ‘movement chain’. If you get this step wrong all your subsequent steps will be wrong, hindering your balance and your ability to hit the shot.

World-class players recognise the importance of the first step in getting themselves off the spot with maximum power and balance.

Top players exaggerate andfocus on their first step on every point. If they are weaker or slower going to the left or the right, or any other angle for that matter, this weakness will almost certainly be exploited.

The split step is a ‘jump move’ or ‘jump step’ (pic A) of enormous importance. The key to an effective split step is to be landing when your opponent makes contact with the ball. Coaches normally say ‘split as your opponent hits’ which is in fact way too late for toptennis. We’re only talking about split seconds here, but the difference is huge. The best timeto start your jump is as youropponent starts to initiate their forward swing.

Note, however, that there are different kinds of split step for different parts of the court: 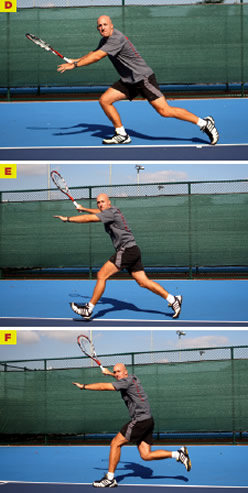 Baseline split –‘split and glide’
At an elite level the split is uneven, i.e. you land on one foot before the other. This enables you to open the opposite hip to help you move off. So, for example, if you are moving to hit a forehand you would land more on your left foot (pic B) so that you can open your right hip to drive into your first step (pic C), and vice versa. This movement (usually performed at the baseline) can be described as a ‘split and glide’. The movement is similar to that of a speed skater when pushing off.

First volley split –‘adjusting split’
As you’re moving forwards to hit your first volley you should use an ‘adjusting’ split, which means that you land one foot in front of the other. This means that instead of taking a big jump, you’reeffectively using small adjustment steps and your hip will open inthe direction of the momentumof the movement – forward foran easy kill, outwards for a widevolley and backwards for a desperation move.

Second volleyor return-of-servesplit – ‘sit split’
The ‘sit split’ is when both feet land at exactly the same time, and is commonly used on the second volley close to the net or on the return of serve. This kind of split step enables you to be still and balanced so that you can easily track the ball and then move explosively in the direction required. Your feet should be more than shoulder-width apart, giving you a wide base from which to balance, but it doesn’t need to be too big or you’ll get stuck in the mud! Land on toes then heels and then sink down. Basically you split, sink, then move (or rather glide) atthe level you have sunk to for the first step.

Here are some further pointers to an effective first step:

Shin angle
It’s important to create a positive shin angle of 45° in relation to the ground so that you can push off explosively (pic D). If your shin is vertical you can’t push off.

Weight transference and lean
To move explosively you need to drive downwards from under your centre of gravity, i.e. your belly button. So, for example, if you’re hitting a forehand you need to split step, land on your left foot, sink down, open your right hip (i.e. your right foot will be pointing in the direction of the ball without turning your shoulders too early) and then transfer your weight until your belly button is over your right foot. Note that the maximum ‘power angle’ in your legs should be between 130° and 140° of knee bend. From this position you lean your upper body forwards in the direction of the ball. (See pic D as mentioned above).

Heel first
If you are setting off to the right, the left foot drives into a big running step involving a heel-to flat-to toe action (pics E & F). This enables you to activate your glute muscles (i.e. your backside) to help you drive your legs into the ball. This heel-toe movement patterning is very common in tennis and counters another myth that tennis players run on their toes.

Sampras used to say that as long as he got his first step right, the rest would always follow

JEZ GREEN
Jez Green is one of the world’s leading tennis fitness trainers and in recent months has been working with British No.1 Andy Murray on his movement and conditioning. Jez is also in charge of the physical conditioning of rising stars at the MCTA Group. Prior to his current role, he divided his time between helping professional players prepare for the Tour and working as a Conditioning Consultant for the LTA. Other stars he has worked with over the years include Daniela Hantuchova and Tatiana Golovin. Jez has recently produced a ‘Tennis Movement Training’ DVD for £24.99 available online here