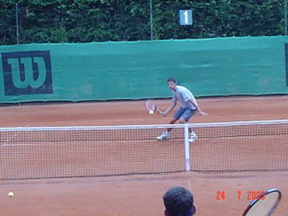 The number one error for volleys is to be afraid of the ball, allowing the ball to come into you, rather than sending your hands out and the racket out to meet the ball.

The second crucial error, is people swinging at the volleys. The volley is just a catch - get control of your hands to catch the balls on the strings, before you start thinking about power on the volleys. The power of the volleys comes from the legs, not from the arms swinging.

The common error on the smash is people taking their eyes off the ball and looking at the target. This causes the ball to drop and then the shoulders to drop and most smashes are netted.

The second error is to smash with the wrist leading, rather than reaching up and hitting the ball when your arm is totally stretched to its limits. Therefore hit the ball at the highest point possible.

Another error in moving back for overheads, is that people move backwards with their back to the back-fence, rather than moving back sideways. If you move back sideways well, then you could have the error of hitting the smash sideways on. Rotate the hips to face the net as you make contact.

1. The number one enemy of the tennis player, at no matter what level, is not watching the ball long enough.

2. The second common error, when facing a player who is hitting the ball quite hard, is that you fall back slightly as you hit the ball, rather than holding your ground and moving through the ball if you can.

3. A third error is not watching your opponent hit the ball. Therefore you always start off late as you run for shots. If you watch your opponent hitting the ball, you can pick up earlier where they are going to hit it and start moving. This is called good anticipation.

Many players panic if they start off badly. You show a lot of maturity and signs of becoming a good player when you just focus on watching the ball. Keep playing as hard as you can, without panicking, when the other player starts very well and you start poorly.