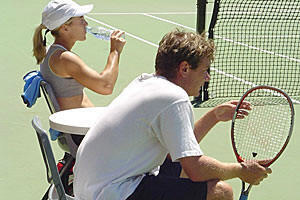 To have the opportunity to be around a world number one for five weeks is a once-in-a-lifetime opportunity, but to be with two is a real privilege. I was lucky enough to be the hitting partner during the 2001 and 2002 Sydney International and Australian Open with Martina Hingis and also this year during the same two tournaments with Justine Henin.

Justine went on to win her first Australian Open, whilst Martina was unlucky to lose to Jennifer Capriati in both the 2001 and 2002 Open finals.

Not only was it interesting to learn the ins and outs of these players and their routines on and off the court, but to also get to know them outside of tennis. It also proved to me how important the physical side of women’s tennis has become over the past few years, with players needing to be much physically stronger and mentally tougher to match it with these top girls.

Martina’s hand skills were second to none and this part of her game she relied heavily on. Her ability to manoeuvre the ball around the court and force her opponents out of position was incredible, much in part to the fact that she was able to take the ball so early, something which her mother Melanie had emphasised from a very young age.

She had an unbelievable amount of natural ability and her success in doubles can probably be attributed to this. Most importantly though she understood the game of tennis and followed a very strict game plan each time she stepped on to the match court.

Physically though she was not as strong as other girls, like the Williams sisters or Capriati and these players began to open up weaknesses in her game, such as her serve. During the two years I was with her there was very little emphasis on strength and conditioning, which is without doubt the reason why she lost the 2002 Australian Open final, squandering a 6/4 4/0 lead and holding numerous match points. 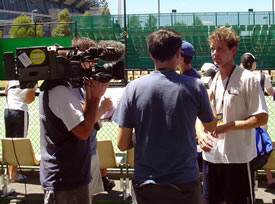 As a person, Martina was extremely easy going and made me feel part of the team, whether we were on or off the court. Her on-court training involved a very set routine, which consisted of only two or three drills. She rarely played down the middle of the court and much of her drilling involved moving the ball around side to side. There was also emphasis on hand skills, which were like I mentioned before phenomenal.

The team around both players is and was very strong. Justine travels with her husband and coach whilst Martina travelled with her mum Melanie, who also coached her as well as Mario, Melanie’s partner. It is absolutely essential that any top player has a good support base around them to help them progress during their career, but also to offer advice with off-court issues, such as the heavy media commitments which the players are expected to meet.

Justine was a lot more intense on the court and physically was a lot stronger than Martina. Her training and pre-match routine was short and sharp. We would practice for anywhere between 25 to 30 minutes, a couple of hours prior to her match. It would involve hitting some balls down the centre, followed by volleys and then some points to finish up. The general atmosphere whilst on the court with Justine was a lot more energised and intense than when I was with Martina.

Both players have been at the peak of the women’s game and have both won Grand Slam singles titles. It is certainly interesting to get a view from the inside as to how they have both got there and to how they handled themselves once they were in that position. 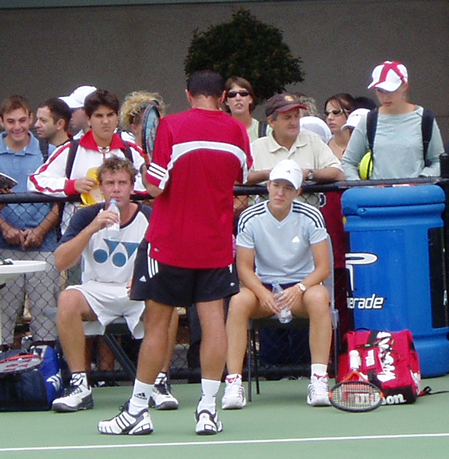 There certainly is no one way of getting to the top and Martina and Justine are an example of this. Their personalities are a lot different, as is the way they conduct themselves and most importantly the way they play the game. Their work ethic though is of the highest quality and this is just one of the many integral parts that need to be in place to make it to the highest level of the game.

At the Leeds Academy we have adapted some of the key principles Jim Edgar uses at the Bolton Arena, many of which you may be able to absorb into your coaching and playing practices.