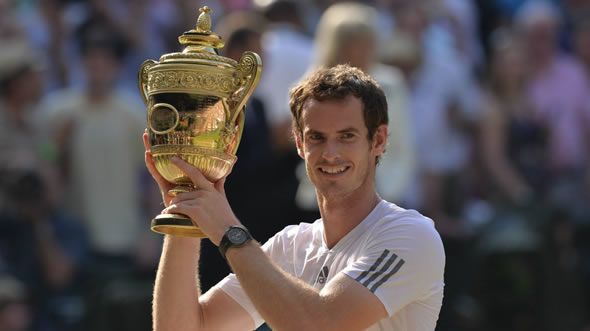 History only the start for Andy Murray

Andy Murray's historical win at Wimbledon is his third major title (two slams and Olympic gold). His career in terms of how great he will be is in its infancy as he has the game and belief to become the number one player in the world with further Grand Slam wins.

The mental strength he will have gained from winning Wimbledon especially coming through the final game of the match will convince him that he can emulate Novak djokovic, Rafa Nadal and Roger Federer in winning multiple slams in successive years.

Although it is always dangerous in sport to make any predictions, I will say that it is highly likely that Andy will win more slams rather than not. I would like to congratulate his whole team and to say that the Sunday before Wimbledon began in a conversation with Ivan, I felt that he was confident that Andy's time had come and although sensibly he did not commit an opinion to who the alpha male was in the locker room, I was sure he, like myself felt it was Andy.

Wimbledon is a special place and I've spent a lot of time over the years watching, coaching and observing how this tournament develops year on year and how the players as they grow older learn to revere the history with humility and an appreciation for all those who triumphed before them and for all those who will come after them. The brashness of Connors, McEnroe, Agassi, Nastase and Andy himself overtime dissolves and its place in sport, its history evolves and shapes human beings into statesmanlike reverence. It is the "Big Daddy" with few rivals in sport, The Masters golf tournament, Monte Carlo Grand Prix, Lords, Tour de France to name a few. This would make a fascinating competition, to ask for suggestions of the top 10 sporting events outside of the Olympics, World Cup, Euros and all inter country events. I would be surprised if Wimbledon did not top the list.

Andy Murray joins the pantheon of tennis. A privilege to watch for a man who is privileged to join a unique and small club of Wimbledon Champions.