When it comes to tennis movement, it is the first step that is by far the most crucial. This point was covered in detail in the March 2008 issue of ACE. This month I am going to take you through some simple yet effective drills designed to train the first step. The end result should be quicker, more powerful and efficient movement to the ball.

Before I do, however, let me remind you of some of the most important technical points regarding the first step:

The drills described below have been performed by all the players I’ve ever worked with, including Andy Murray, Daniela Hantuchova, Tatiana Golovin and Kristina Brandi. They need to be performed with perfect balance and posture in an ‘athletic position’ with a low centre of gravity and a wide base at all times. To get this position right, it helps to imagine you are moving under a low ceiling!

Aim: This drill trains the explosive first step, speed and coordination required when running to wide balls. It also emphasises the use of adjustment steps around the ball.

Method: Place two cones five foot-spaces apart either side of the centre mark on the baseline. Start with your right foot directly behind one of the cones (right foot for a right-handed player – vice versa for a leftie). Move in a figure of eight around the two cones, staying as close to them as you can without hitting them. Drive off with a big first step whenever you change direction during the drill (pics 1a-1d). 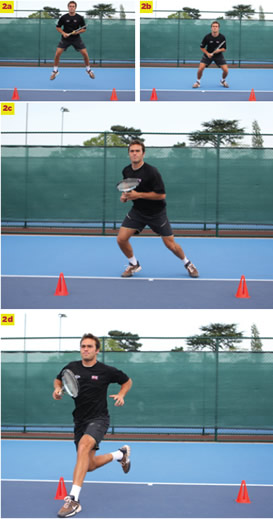 Aim: This drill trains the explosive first step forward to track down a drop shot. It emphasises the split step followed by the dynamic first move.

Method: Place two cones five foot-spaces apart either side of the centre mark and a metre or so in front of the baseline. Starting on the centre mark, use a dynamic split step (with an even landing – both feet at the same time) then drive into the first step forwards around one of the cones. If you are going to the left cone your right foot goes first; if moving to the right cone, move your left foot first. Facing forwards, back-pedal to the centre mark using as many dynamic little steps as you can (pics 2a-2d).

Repetitions: Move as many times around the two cones as you can in 30 seconds. Repeat three times, with a minute’s rest in between.

Aim: This drill works on movement to both the forehand and the backhand sides.

Method: Place a cone on the inside tramline on the forehand side. Start with a ‘baseline’ split, whereby you land more on your left foot (for a right-hander; pic 3a) so that you can open your right hip to make the first step (pic 3b) and move to the cone using just two big steps (pics 3c & 3d). 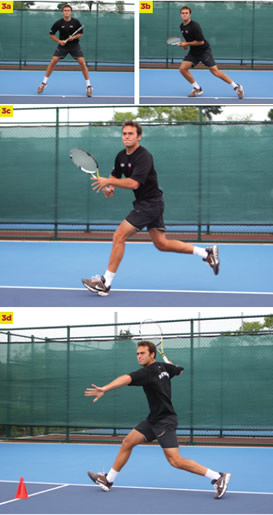 Simulate a forehand stroke and then return to the middle using smaller, choppier yet dynamic sidesteps. For the backhand, move the cone over to the other side of the court, ensuring that when you split you land more on your right foot, thus enabling you to open your left hip ready for the all-important first step. Simulate the backhand stroke and return to the middle.

Repetitions: Continue for30 seconds. Repeat three times on each side, with a minute’s rest in between.